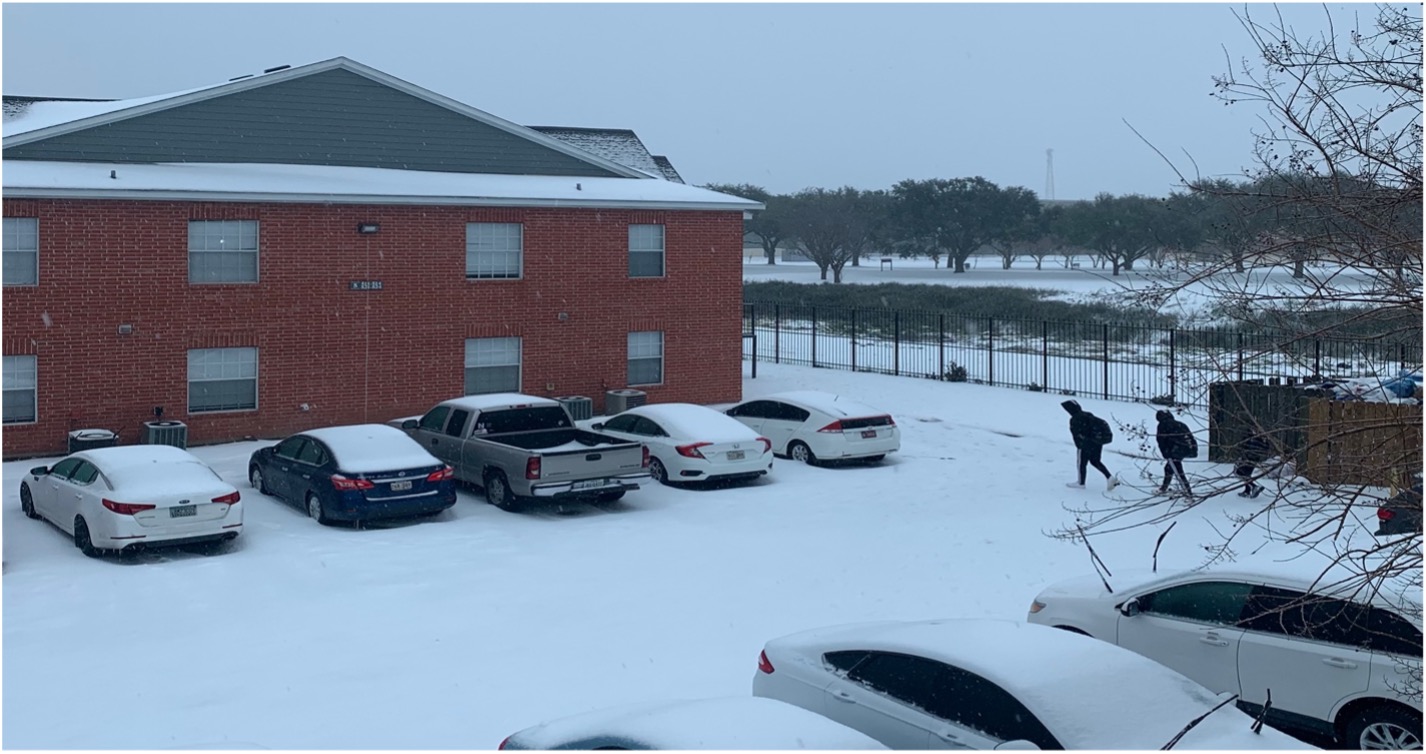 On Monday, February 15th, Shreveport residents woke up to a generous coating of snow. For LSUS students, this meant a closure of all campus activity. The news was welcomed by most, as they enjoyed a snow day.

The enjoyment ran short, however, as by Tuesday, most Pilots Pointe residents were without water. This was due to the severe winter storm that continued to move through the Ark-La-Tex. Some residents experienced very low pressure coming from kitchen and bathroom faucets, while most had no water at all coming from the shower. A boil advisory was enforced city-wide to prevent residents from drinking unfiltered water, as it may be of questionable microbiological quality.

A winter mix of snow and sleet resulted in not only icy roads, but those living on the second floor of the campus apartments found themselves more-or-less ‘trapped’ by the slickness of their outdoor stairs. The city also recorded a low of 1 degree Fahrenheit on Tuesday, the lowest it has been since 1930.

A great convenience of the campus apartments is being in proximity to numerous stores and eating establishments. Most notably, Walmart, where most residents buy their groceries. Yet almost every store within range was closed. When asked about the conditions during the winter storm, Pilots Pointe resident, Andres Mendoza, shares his experience, “I barely had any food. Walmart was closed and it wasn’t like I could order food either because delivery services weren’t operating.” This was a reality for many of the students.

An ongoing Wi-Fi issue was heightened by the events of the weather. Not only were students without water, some without food or the ability to leave their apartments, many also had no access to the internet. Dean of Arts & Sciences, Tibor Szarvas, was made aware of the issue and requested that faculty be understanding. On February 15th he reached out to faculty with this message, “…Bear in mind that some students may not have internet access… please, be generous with deadlines if work was to be turned in this week.” Many residents often used on campus facilities such as the library and computer labs to complete course work. These were unavailable as campus remained closed.

Not only did this affect the completion of schoolwork, but for certain residents, it meant the inability to receive updates. “We were completely offline for a few days and knew nothing about the boil advisory, we had some water coming from our kitchen faucet, so we continued to drink that,” resident, Liam Vivian stated.

Friday, February 19th saw clear skies and rising temperatures. Slowly but surely the icy snow began melting away over the weekend. Yet, it wouldn’t be until Tuesday, the 22nd when residents began experience normal water pressure again. Despite no more snow, the LSUS campus stayed closed, with face-to-face classes being taught remotely for the week.

The boil advisory was officially lifted across Shreveport on Saturday, the 27th of February. This saw the LSUS campus re-open for normal activity as we entered March.